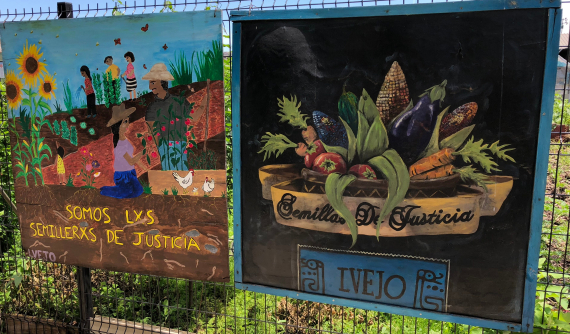 I started from my home in Lakeview, on Chicago’s North Side, on a delightfully cool June morning, going south, riding my bike with a friendly north wind at my back, pushing me towards Little Village.

It was a good introduction to the event I was pedaling toward, the Little Village Environmental Justice Organization’s (LVEJO) Toxic Tour. Karen, the tour guide, was a young woman whose job includes conducting these tours. This one was organized by 350 Chicago, the local chapter of 350.org, one of the leading U.S. climate activist groups.

The Seeds of Justice garden.

The tour began that Saturday with a meeting at the LVEJO “Seeds of Justice” community garden where some 30 families raise chickens, veggies and ornamental plants in raised beds built over six feet of gravel that covers contaminated soil. The group started farming it in 2013 on a toxic bit of land, after a difficult campaign that, in 2010, won an EPA cleanup of the poisons some unknown businesses had left behind.

LVEJO launched the campaign after a neighborhood canvas pinpointed the problem. Today, spurred on by the activity around the Seeds of Justice, there are also 100 gardens in yards around the area.

The garden has become a community asset, a place for residents to raise fresh food for their tables, teach gardening, socialize and form bonds – in the good weather there is a weekly potluck in a dedicated social area that often draws 60 or more for shared, home-cooked meals.

The garden lies along a right of way from a former rail line that LVEJO hopes to transform into a public walkway, similar to New York’s High Line or Chicago’s 606 trail, only this one would be on ground level. Among other factors slowing progress on this project, LVEJO wants to avoid a gentrification push, which has happened rapidly along the two aforementioned trails.

The tour moved along towards Little Village’s neighbor along its eastern border – Cook County Jail. Across the street from the jail, to the west, now-defunct Celotex once made asphalt, leaving a Superfund site behind when it closed down. It is the largest Superfund site in the United States that’s been converted into a park.

La Villita Park, with Cook County Jail in the background.

The 21.5-acre La Villita Park, was built in 2014 after Celotex and its successor, Honeywell Corp., were forced to clean up, in the days when the EPA did its job (well, sort of). The cleanup also included remediating more than 150 homes, including getting rid of and replacing the soil in their yards, which were made toxic by rain and sewer runoff from the site.

The community had a choice when it came to the highly toxic soil on the plant site – get it removed and replaced or put 10 feet of gravel and a cap over it. Folks opted for the latter solution, according to our guide, so no one else would have to contend with the toxic soil.

An interesting sidelight: When we were in the park, it was during one of Mexico’s Gold Cup soccer matches. The two full-size soccer fields, usually teeming with players of all ages on a Saturday morning, were without a single soul.

Though its dogged community organizing has had a number of victories and though the group is currently pursuing several other environmental justice campaigns, LVEJO is perhaps best known for being in the forefront, along with the PERRO group in Pilsen, of the Clean Power Coalition, which was responsible for getting two heavily polluting coal plants in their area shut down. It was a long (15 years), but eventually successful battle.

The main issue for Little Village was asthma – a Harvard School of Public Health study found the area averaged 42 asthma deaths per year linked to the plants’ emissions. But the coal-plant-closure campaign was joined by groups who had greenhouse gases in mind. Besides the soot, particulate matter and other toxic chemicals, the amount of carbon dioxide these plants were emitting was obscene.

Which brings me to the reason 350.org rounded up 20 of us, mostly young folks, but a couple of older ones like me, to go on this toxic tour.

“Climate change is not just an environmental issue, or a social justice issue, or an economic issue — it’s all of those at once,” the 350.org website says. “It’s one of the biggest challenges humanity has ever faced, and we are going to have to work together to solve it.”

Working together, yes. The climate movement is much too white, too professional for its own good. Groups like 350.org and the group I work with, The Climate Reality Project, know they need people of color in the United States to provide input, leadership and participation if we are to stop using fossil fuels soon enough to prevent the most dire effects of climate change. But they don’t know how. By organizing a group to take the Toxic Tour, 350 Chicago suggests a way forward. Just like LVEJO has done, we have to start by listening.

This post was originally published on Chapter member Linc Cohen’s blog, A Boomer Retires, on July 5, 2018. Please visit his blog to read more.

Would people be interested in taking the Toxic Tour with us? We have secured a tour date of Monday, September 17th at 5:00pm if we get enough interested participants. Join us.