Tales from the field: Our first virtual Lobby Day 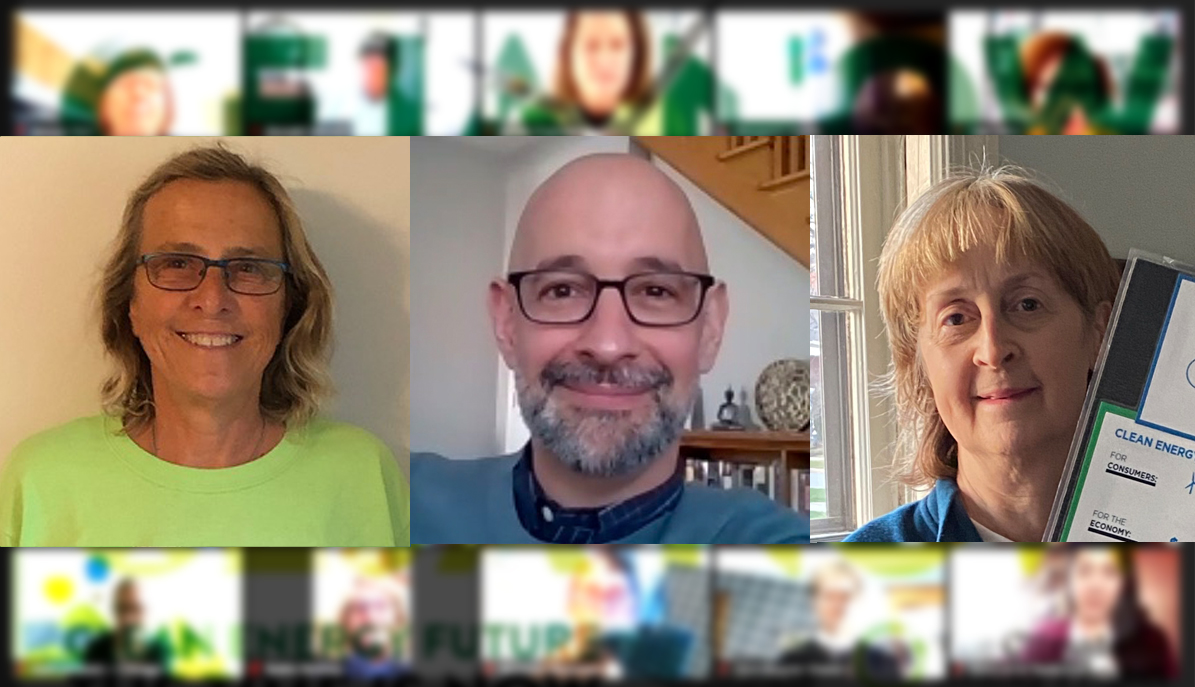 Tales from the Field

One of the most important things we do as advocates for climate action is to talk to our elected officials — which should be one of the most natural of activities in a democracy because our legislators work for us!

For many of us, the first time we step foot into the Capitol building or a legislative office can feel pretty intimidating. The good news is, for the foreseeable future, we’ll be having our legislative meetings via Zoom, which are as easy as clicking a link, and you can do it from the comfort of your own home. As a result, our chapter turned out more than 50 people, our highest number ever, for our first virtual Lobby Day on Nov. 12.

If you haven’t participated in a Lobby Day, yet, we have good news. Many of our Climate Reality Chicago members have stepped up to help demystify the process for you. Here are their stories.

Note: As with all Lobby Days, the Illinois Clean Jobs Coalition assigned an experienced environmental lobbyist for each meeting, and many of the groups met via Zoom to plan their meetings. 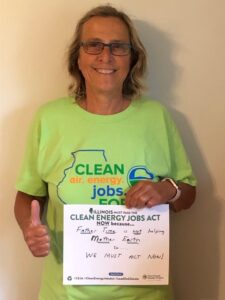 Going to Springfield and feeling the grandeur of the Capitol and the chaos and busyness of a Lobby Day is an experience not to be missed.  And while lobbying by Zoom was certainly less chaotic, our conversations seemed less formal and perhaps even more productive.

But three years ago, I felt intimidated by CEJA co-sponsor Sen. Michael Hasting’s importance and big office.  Hastings, D-Frankfort, who chairs the Energy and Public Utilities Committee, quickly dispelled that and was jovial and listened intently.  We were told, and it’s true… they love to have their pictures taken.  He initiated that on Zoom.  I was also impressed with how transparent he was on the issue of CEJA.  He’s not 100% supportive, and he doesn’t believe it will be voted on before March… both messages he knows disappointed us.

With all my preparation, which included reading the 10-page summary of CEJA and other information, I could not tell him anything he didn’t already know.  However, he took notes on what we said this time and he heard the urgency in our message.  He gave us twice our allotted time, and seemed sincere in his thanks to us for caring enough to meet.

By contrast, Rep. Margo McDermed, R-Mokena, who voted against FEJA, doesn’t feel renewable energy needs any more subsidies and feels that the scandal with ComEd has proved her point.  In past meetings she has seemed set against CEJA.  This time there was a bit of softening.  She said she would look objectively at the bill in its final form and would contact us to hear our opinion on any modifications made to CEJA if it comes up in the lame-duck session.  I think that is progress.  She is retiring, which might be the reason she has softened and will only be here to vote on CEJA if it comes up in the lame-duck session.  I was told that sometimes knowing the opposition’s views is helpful to the coalition.  So, I feel our lobbying her is quite valuable. 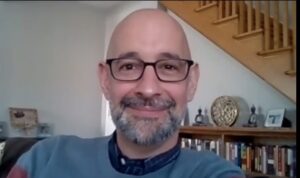 Our group’s meeting with Rep. Jaime Andrade, D-Chicago, was useful, focused, and productive.  He is a co-sponsor of CEJA, so we began by thanking him and then focused on urging him to pressure his colleagues and House leadership to prioritize CEJA and work to pass it during the lame-duck session.  We also advised him of the expiring state incentives for solar, which he was not aware of.  It was beneficial to have Andrade’s focus on just this issue without the distractions often present at an in-person Lobby Day.  He committed to working on talking with downstate lawmakers who lost their elections and who otherwise might not support CEJA because of the lingering pressure of the coal industry. 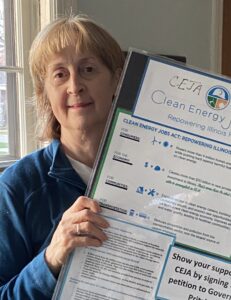 We knew that the meeting with Rep. Deanne Mazzochi, R-Elmhurst, would be difficult as she has made statements reflecting climate change denial. My personal story, where I talked about driving west in August to pick up my niece and her husband and new baby as they were fleeing the wildfires around Santa Cruz, Calif., actually had her respond that she does not believe in this apocalyptic scenario — but she tried to show that she was willing to listen. Her emphasis was on downstate folks, who she said won’t go for it and that compromises would probably be necessary to get the bill to the floor for a vote.

Rep. Terra Costa Howard, D-Glen Ellyn, was amazing and stated that we did not need to lobby her for support. She gave us advice on how we might gain support from the Republicans, namely to get more of their constituents to contact them in support of CEJA. The meeting was informative and uplifting and fortunately followed the meeting with Mazzochi, so we were left hopeful and inspired. 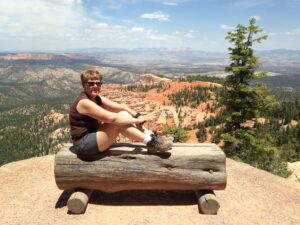 I know both my representative, Rep. Lindsey LaPointe, D-Chicago, and Sen. Robert Martwick, D-Chicago, well, and both are co-sponsors of CEJA. I have spoken with them about CEJA on prior Lobby Days, so they are well aware of my commitment to climate and environmental issues.

My advice to someone who has been in a similar position is to ask their representative to do more. Their vote is not enough. In my case, I asked them to speak to a representative who has not committed to CEJA. They both said that they would, so I will take that as a win and will be watching to see how that person votes if CEJA finally comes up for a vote.

Add your voice to our advocacy

If you haven’t already written your legislators and the governor to tell them why you support CEJA, please do so now! Here are a couple of links to help you: a form letter or a guide to help you compose your own letter, which is always preferred!