The Courage of their Conviction 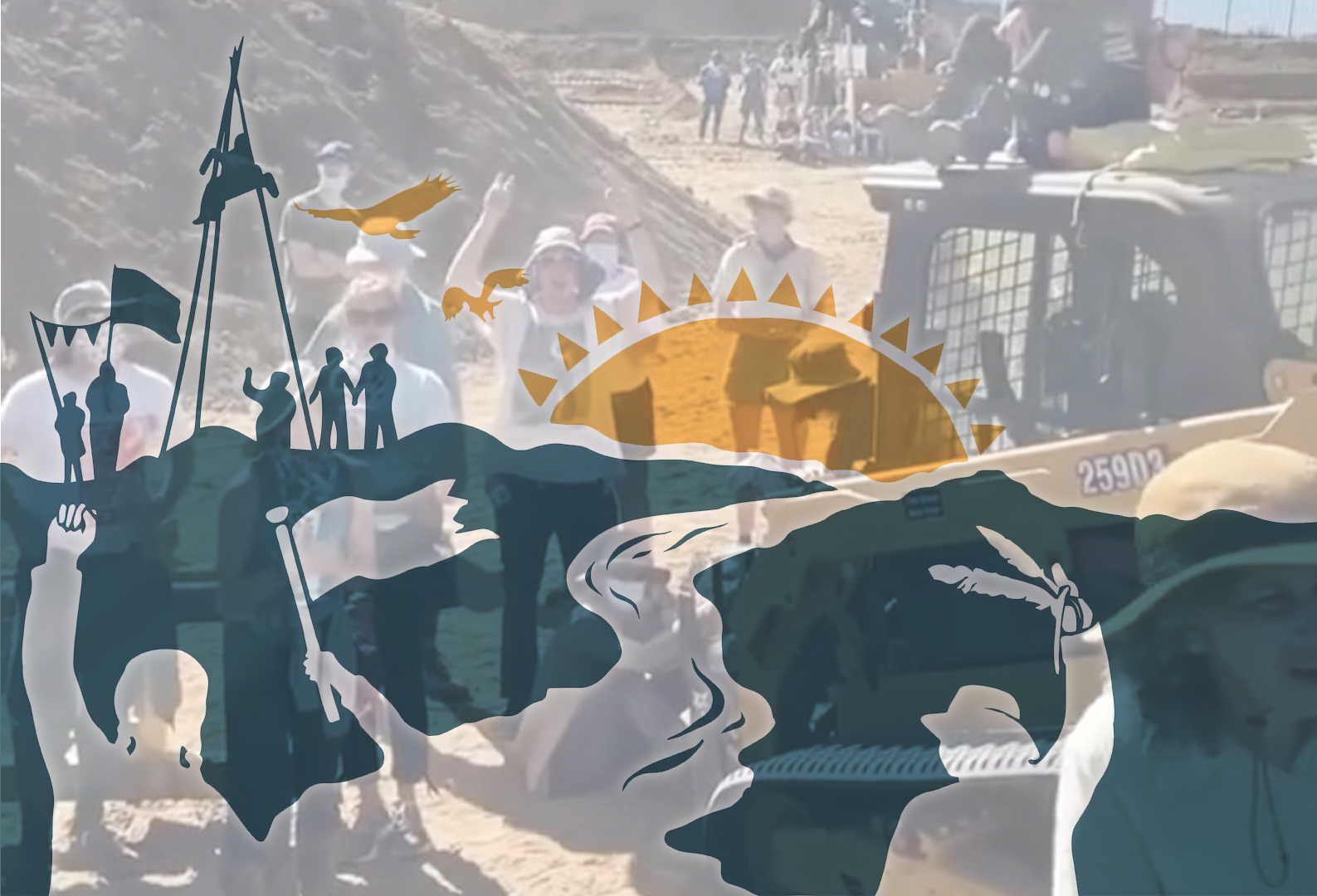 The Courage of their Conviction

What it was like on the frontlines protesting Line 3

Tarragon, along with several other members of our chapter, participated in a direct action while at the Treaty People Gathering in northern Minnesota in early June to protest the relocation and expansion of the Line 3 tar sands oil pipeline across treaty territory. The project violates treaty rights, threatens our waterways and will worsen climate change.

The Treaty People Gathering, a weekend of nonviolent direct action, organized by the Anishinaabe people of northern Minnesota, along with MN350.org and many other nonprofits drew about 2,000 people from all over the country. The new Line 3 doubles the capacity of the old Line 3 and is equivalent to 50 coal plants — all at a moment when the climate crisis requires we move toward zero emissions to protect the future.

Following a day of direct action across multiple sites on June 7, more than 200 people were arrested and taken to county jails across Minnesota. Protests continue along the construction route by water protectors from around the country.

More of us will likely be called to direct action in the future because the companies that profit from extracting and burning fossil fuels are fighting hard and spending millions of dollars to preserve their industry. Since this is an existential fight for our future on planet Earth, Tarragon’s experience can help us prepare.

The Indigenous women, who are leading the effort and continue to monitor numerous waterways impacted by Enbridge’s work, invite us to join them on the frontlines.

The following is a conversation between Communications Chair Jane Goldenberg and Tarragon (an action name). The conversation was edited for length and clarity.

JG: How long had you thought about putting your body on the line and risking arrest for our climate?

T: I absolutely wanted to go to Standing Rock to protest the Dakota Access pipeline… but I had my kids at home. It became the family laugh. I’m going to try not to get arrested while you’re still in high school, but I can’t promise.

JG: Why is this issue so important to you?

JG: Here we are, five years later, with Line 3 threatening to become just as important as Standing Rock.

JG: What was the moment you knew you would take a red role and potentially be subject to arrest?

T: In the days before the event, there was a specific call for people willing to be in a red role. There we were on our chat. Somebody puts that message out. And I see that there are already five people who say they will do this. I had to do the soul searching.

I knew I had to do this, but I didn’t know what was going to happen (as part of the action). I just knew I had to bring my body there and, moment by moment, do whatever… what I felt comfortable with. But be available.

My biggest hold-up was just the booking process, hearing about the strip search — bend over, cough. I was like I don’t know if I can do that. Then, OK, all right I can do that. What’s the big deal? You’re going to be in front of one police officer. It’s the least I can do. And then in the end, I didn’t have to do it. The universe gave me a gift.

This was me using my privilege for the benefit of the greater good and to back up Indigenous people. They’re going to treat people like me better in the system.

JG: How was the training?

T: It wasn’t really that intense, it’s very doable for most people. We need a revolving door of people to take part. You operate on a need-to-know basis. You’re kept in the dark on a lot of things for your own good. We were trained on different approaches to what was going to happen. We didn’t know which way it was going to go. Lots of leaps of faith. My affinity group came together very organically of people that had mostly come on their own. We had about 15 people.

JG: What was the day of action like for you and your affinity group?

T: It feels like hunger games except you’re not going to kill each other. All of a sudden, you’re dropped somewhere. We don’t know where. We had a long drive. We passed a boat and some banners. I literally thought we were just passing one of the actions that was going on, and we were going somewhere else. We came back around, and all of a sudden, it was like go, go, go, and I’m going through the field.

It was chaotic. We got up to the gated area, set up. Construction workers were flying past us in their trucks, high-tailing it out of there. Suddenly there was an opportunity to lock down inside the gates. And the next minute there are dozens locked down to construction equipment in the middle of this construction site that we are slowly realizing is a pumping station.

JG: Why lock down at all?

T: Because it shuts down construction! It costs them a lot of money for every single hour that they’re delayed. And we don’t want this pipeline being built. The new route crosses the Mississippi River in multiple places, including the headwaters, as well as hundreds of other bodies of water in Minnesota alone. The situation is urgent because the pipeline is already about 70 percent built, and pipelines inevitably leak. We have to protect our water.

JG: Was it scary being cut out?

T: It was a little frightening when your hand’s right there. They put protective glasses on us. Little bits were flying everywhere, I was covered in it. I think it only took like 15 minutes to cut us out, but dozens of us were locked down and some took longer. They (the police) kept calling it a small saw, but it looked like a Dremel saw. They have to be very careful because they can’t hurt you.

JG: What happened after you were arrested?

T: There were over a dozen of us at the jail I was sent to. All the females were in one cell block together and the males in a separate one. It took three hours to get there. We would yell out to talk to each other, sending each other support and positive messages.

The biggest thing for me is I had a panic attack when I got in the police van. It was very tight quarters and it was very warm. I don’t have a history of panic attacks. I felt like my throat was closing. I couldn’t breathe. I was like, I have to get out of here. I have to get out of here. We asked the officers to let me out and they wouldn’t. Eventually, thankfully, they did because it was four hours before we left the action site. In jail, they would often say they were going to do something for you but didn’t actually.

But, you know, this is nonviolent direct action. I think there’s solace in that. This is Gandhi. This is how you change the things that matter in the world. This is Martin Luther King, Jr. The future history of this movement will prove who was on the right side. I’m on the side of Water Protectors. Water is life.

T: It was very psychological, particularly on the first day. This is by design. When you drive for three hours in the pitch black, I’m wondering where am I? They didn’t book us for over 20 hours, which made me feel like I was lost in the system. I was wondering, does anyone know I’m here? I didn’t get my chance for a call for a least 10 hours, and then when I tried my family, I couldn’t reach them. I was locked in a cell. I couldn’t even see outside. The small window was literally frosted glass. There was another window to a common area, but whenever anyone was out there, my cellmate stood in front of it, blocking my view. A light was on 24 hours.

There was a bunk bed, a toilet in the corner, a desk, a stool. There was no ladder for the bunk bed. I was in the top bunk so had to step on the desk to get up. If I was in the cell, I was basically in the bed. Where else was I going to be? Because my cellmate was in the bottom bunk, the desk and stool felt like their space. They were a little off kilter because they wouldn’t get their meds or arrange for their medical dietary needs. But I was happy to sleep most of the time I was in.

JG: What happens next?

T: I’ve had my arraignment and will have at least one or two more hearings, but I want my case to go to a jury trial. Everyone has a different goal. Some people need to get back to their lives and want it to end as soon as possible. If you’re able to give more time, if you go to a jury trial, you can try to set a precedent.

JG: After spending two nights in jail, what happened when you were released?

T: The jail support team was waiting for us. They rushed over and gave us big hugs and cheered. Everyone was very proud of us. They had messaged us (on “texters” provided by the jail), and we sent a list of what we wanted from Walmart. I got Reese’s peanut butter cups and Gatorade, and my cellmate finally got a meal.

JG: Would you participate in a direct action again?

T: We have gone through the proper channels (to challenge the legality of the pipeline), but everybody’s ignoring us. That’s what requires you to take further action because the systems aren’t working and they’re outdated. I’ll definitely continue to support the cause to the fullest extent possible. My main focus right now is raising as much awareness as possible.

JG: In fact, our country has not really set up a system to protect us from the consequences of climate change. What would you say to other people who are considering direct action?

T: I’ve heard an analogy that people like us are the immune system of our species. We’re trying to protect people. We’re doing the right thing. We have very little time left to make needed changes. If you step up, there’s a very good system (for these types of direct actions) in place. You’re well taken care of. It’s a wonderful community of the most amazing people, great to be a part of, actually. I’ve been on a bunch of calls, and it’s like these are my people. I’m in the right place because when you care about it this much, you know you’re finally doing — I mean everyday when you care about the future of our environment… I never know, when am I doing enough? When is it enough? It’s never enough. I finally felt like I did enough. At least for a moment. That I can at least rest for a moment. (These words were spoken amid many tears.)

We’re on the right side of things. It’s unfortunate more people don’t realize it.

Learn more about the continuing protests and get involved

» The Line 3 oil pipeline project: What you need to know
» Follow on social media: Honor the Earth, RISE Coalition, Ginew Collective, MN350
» Get involved locally by following Chicago Against Line 3 on Facebook, Twitter and Instagram

#StopLine3 by taking action from home!