“Planet of the Humans” Is a Big FLICC’er 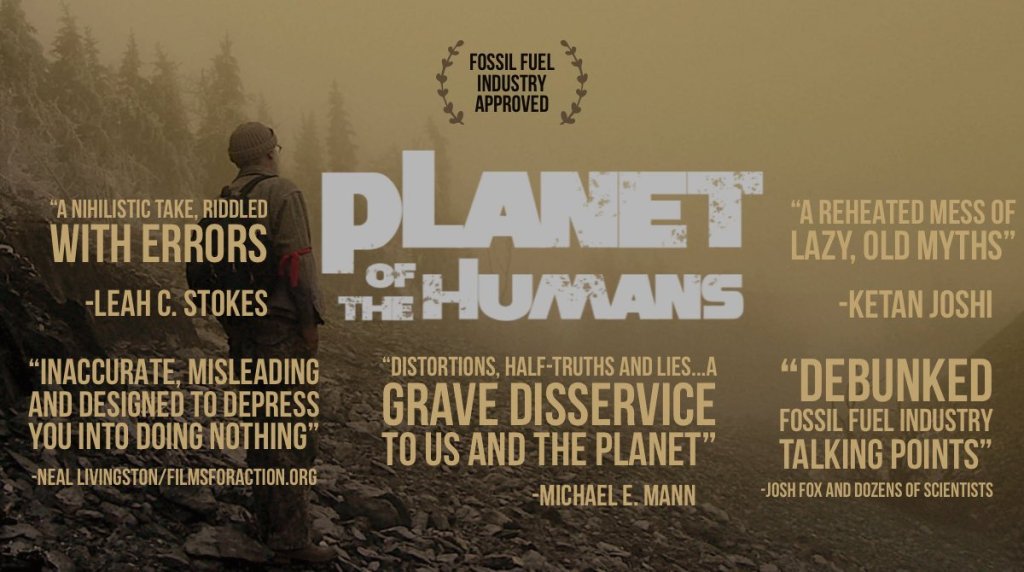 “Planet of the Humans” Is a Big FLICC’er

FLICC.  That stands for:  Fake experts, Logical fallacies, Impossible expectations, Cherry-picking, Conspiracy theories.  The chief strategies used by science deniers are all abundant in the movie “Planet of the Humans.”

The mystique of Michael Moore

The executive producer of this film, Moore is widely admired as a provocative documentarian, a crusader on a tireless mission to expose corporate greed, political gamesmanship and America’s niche sociopathic disorders.

His most recent work, “Planet of the Humans,” however, is a screed fest of misinformation.  Worse, it’s a missed opportunity to tell an authentic story of environmentalism, renewable energy, and honest efforts to solve humanitarian problems.

Instead, the movie currently airing for free on YouTube:

That’s his story and he’s sticking to it

The undercurrent of this movie is that overconsumption and overpopulation are fast-tracking humans to extinction.  Such problems, while undeniably important, demand fact-based considerations in order to deliver constructive solutions.  Conversely, muddled views riddled with inaccuracies lead to dead ends.  Unfortunately, the movie’s director and narrator, Jeff Gibbs, chose the latter and eclipsed any nuggets of truth with his dark storytelling style.

The film’s initial screening was in May 2019, but worldwide release was withheld until April 21 this year – the day before Earth Day’s 50th anniversary.  And with the Covid-19 pandemic causing (at the time of this writing) upwards of 265,000 deaths around the world and counting, the film’s fringe solution that fewer people equals fewer environmental problems is unfortunate.

The movie is free to view until mid-May on YouTube, with no announced plans for theater distribution.

Julie Sacco is a Climate Reality Leader and a nonformal educator who has worked for Chicago’s Museum of Science and Industry, The Nature Conservancy, Midewin National Tallgrass Prairie/US Forest Service, and Openlands.  She enjoys good movies. (cue the crickets)